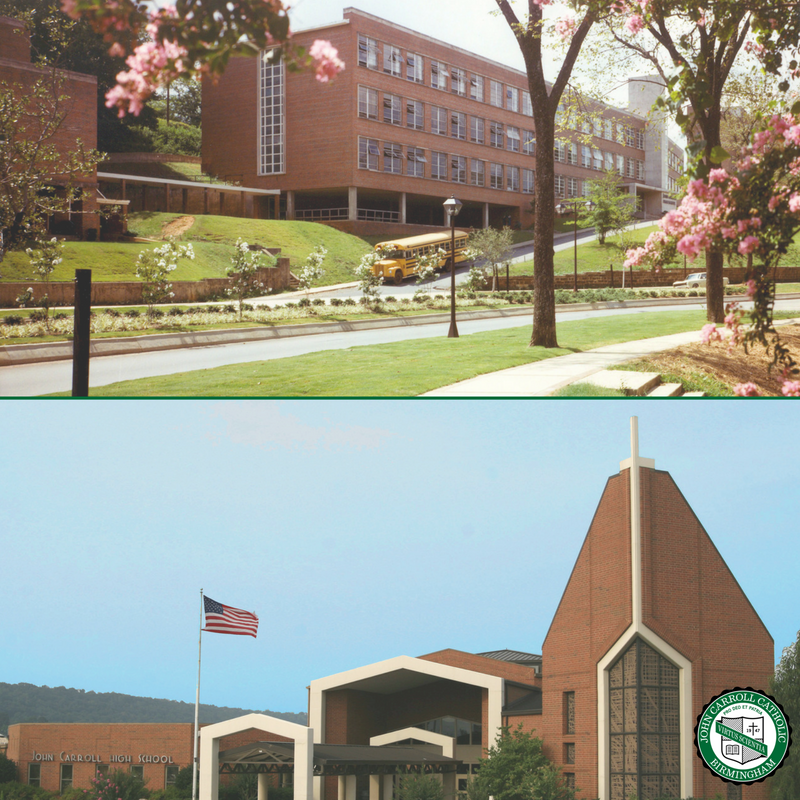 1942 The Friends of Catholic Education was organized by Mr. John Carroll to help raise funds for a Central Catholic High School in Birmingham.

1946 The First Annual Toy Bowl Game was sponsored by the John Carroll Honorary Alumni to raise funds for construction of the school. Actual construction on the school building was started in November.

1947 The main educational unit of the school was opened to 278 students. Reverend Frederick Hughes was the first Principal.

1951 Construction of the Bishop Toolen Catholic Center was completed.

1958 The east wing which houses additional classrooms was completed.

1961 The athletic field located on Montclair Road was completed including the football field, baseball field, running track, and clubhouse.

1963 The second phase of the athletic complex was completed, including the erection of bleachers, lights for the football field and a concession stand.

1964 In September of 1964, Robert C. Smith '66, Madeliene Humphrey '66, Fred Tyson '67, and Diane Tucker '67 transferred from Immaculata High School (as part of Our Lady Of Fatima Parish) to John Carroll as the first African-American students in our school history. This was as a result of the cooperative efforts of Immaculata Principal, Father Farrell, and John Carroll Principal, Monsignor Houck.

1964 The new convent for the Benedictine Sisters of John Carroll was dedicated.

1970 Rev. William R. Houck returned to John Carroll as Principal for one year.

1975 The schedule was changed from an experimental modular system to eight periods of 48 minutes.

1981 The Activity Center (formerly the Benedictine Convent) was opened, including a faculty lounge, art room, and guidance offices.

1989 A Development Office was instituted with Dr. Rebecca Sullivan being named the school's first president.

1992 A new era begins with the relocation of John Carroll Catholic High School to Lakeshore Parkway.

1998 In keeping with the original intent of Archbishop Toolen, the school was officially re-named John Carroll Catholic High School.

2006 Mr. David Chauvette was named as the school’s eleventh Principal.