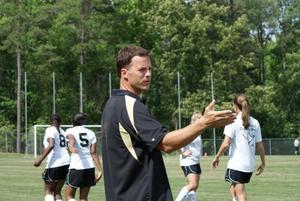 
John Carroll Catholic High School is proud to announce that Matt Kirkpatrick has been hired as the new head boys soccer coach.  Coach Kirkpatrick will be replacing John Carroll Assistant Principal, Hunter Wolfe, who served as varsity head coach for the past two seasons, leading the Cavs program to a 2021 pre-season #1 state ranking and a combined 26-9-3 record.


“The chance to lead one of the winningest soccer programs in the State of Alabama is very exciting and I’m very grateful to John Carroll for the opportunity.  The history and tradition of John Carroll soccer is unmatched and I can’t wait to start working with our players to continue to build upon the program’s legacy.”


“We are so fortunate to have had Mr. Wolfe leading our boys team for the past two years.  His commitment and hard work were unsurpassed, especially during this challenging time of Covid.  He has worked to create a team culture of winning that I know Coach Kirkpatrick will continue to build upon.  Coach Kirkpatrick has established a great reputation throughout the greater Birmingham soccer community, and will be a great addition to the high caliber and well-respected coaches currently leading our student-athletes.”