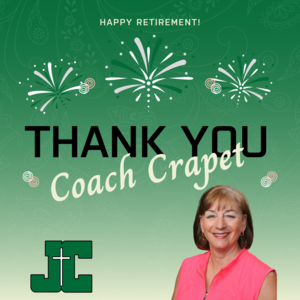 Frances Crapet will walk out the doors of John Carroll one final time today as a teacher, and former coach and administrator. Click here to read!

Frances Crapet has spent the last 34 years as a part of the John Carroll community of teachers, coaches and administrators.  Today, will mark the final day of her legendary career as she officially retires from teaching.


Crapet began her career at John Carroll in 1986 after a short stint at Berry High School where she guided her teams to state tournament runs in 1984 and 1985.  After coming to John Carroll in 1986 she guided the Cavaliers to two state volleyball championships ('96 and '97), two state runner-up finishes ('98 and '99), 10 Elite Eight appearances and two Final Four appearances.  There were also numerous Area and Region Championships for the Cavalier volleyball program during her time as head coach.  Overall, in 27 years at the helm, her volleyball teams compiled a 635-415 record.


In addition to volleyball, Crapet also led the Cavalier Softball team from 1987-2004.  During this time the program compiled a 294-208 record and earned three trips to the state tournament.  She also spent three years leading the girls basketball program from 1988-1991.


In November of 2012, Coach Crapet officially retired from the high school coaching ranks, but continued on in her Assistant Athletics Director duties, which she had added to her responsibilities in 2004.  Eventually being named Athletics Director in 2014.  In 2016, Crapet was officially inducted into the Alabama High School Sports Hall of Fame.  She is a member of the 26th class of inductees which is voted on by the members of the Alabama High School Athletic Directors and Coaches Association (AHSADCA).


Current John Carroll Athletics Director and Cavalier alumnus ('04), Ronald Steele, offered these words regarding Coach Crapet's retirement from teaching, "On Behalf of the entire Athletics Department I would like to thank Coach Crapet for her service as a coach, administrator and PE teacher.  Coach Crapet helped to create a culture of high standards in both the volleyball and softball programs, which permeated throughout the John Carroll athletics department.  I am personally grateful for the opportunity she gave me as a head coach, and we certainly appreciate her positive contribution to the student experience of the athletes she served."


“Along with many important skills, we learned to enjoy what we were doing and to take none of it for granted. When I was not on the court, I was tracking statistics for our team. I wrote our team quote on the top of every stats page for the 1996 season: ‘If there were no tomorrow, how hard would you play today?’ Frances used that quote to remind us that time passes quickly, and we have to take advantage of every moment we have. She taught us so many important life skills as our coach and mentor.”


Thirty-four years of service passes quickly, but one thing we know for sure, is that Frances Crapet took advantage of every moment she had.

On behalf of the students, coaches, teachers and administrators, who have passed through John Carroll over the past 34 years, we want to express our thanks to Coach Crapet for her many fruitful and dedicated years of service to John Carroll. Enjoy retirement!